Prabhupada: Yes. Everywhere. This is the age of forgetting God. We say it is Kali-yuga. Kali-yuga means the age of misunderstanding. And that is, I said, dirty things within the heart. So God is so powerful that if we chant the holy name of God, then we become purified. So our movement is based on this principle, chant the holy name of God. We give all facilities to everyone without any distinction that "You come with us. Come in our temple, chant Hare Krsna mantra, and take little prasadam, refreshment, and gradually you become purified." So if the government authorities give us facilities for this business, that we hold mass sankirtana, Hare Krsna, and give them little prasadam, then we are sure the whole place will change.
Posted by Jyoti Saha at 10:45 7 comments:

Daily Deity Darshan from around the world!

Back to Godhead Magazine #25 (Part three)

A Study in Mysticism
By His Divine Grace A.C. Bhaktivedanta Swami

An explanation of the mystic techniques offered by the great
Teachers of Vedic wisdom—and their value to contemporary man.

The Goal of Transcendental Meditation

In The Bhagavad Gita, the Sanskrit word "Mam" is frequently used. This word means "unto me." Krishna, the Supreme Personality of Godhead says, "unto Me" -- Krishna. We cannot interpret this in a different way. When I say, "Bring me a glass of water," it means that I am the person in want of the glass of water, and if you supply to me and not to others, then it is right. When Krishna says, "unto Me," that means Krishna. But philosophers are still interpreting -- they say "unto something else." Even grammatically this is wrong.

One who has developed attachment to Krishna is Krishna conscious. They say if you have attachment for your lover you always think of her. That is lover consciousness. It is natural. It is stated that a woman who has another lover besides her husband shows herself very attentive to her household duties, but is always thinking, "When shall my lover and I meet in the night?" This is an example: It is possible, in spite of our false engagement, if we love somebody, to think of him always. If materially it is possible, why not spiritually? That is the whole teaching of The Bhagavad Gita.

>>> Ref. VedaBase => The Goal of Transcendental Meditation
Posted by Jyoti Saha at 04:01 3 comments:

Easy Journey to Other Planets

This eternally existing antimaterial world is nonmanifested to the material scientist. He can at best only have information of its existence as being contrary to the modes of material Nature. Full details of the antimaterial realm can be known only from those infallible sources, the liberated authorities who have thoroughly realized the constitution of the antimaterial principle.

This information of the antimaterial world is therefore had by the aural reception of a submissive disciple of the Personality of Godhead. The Vedas or the Vedic knowledge was thus imparted into the heart of Brahma, the first living being in the created material world, and Brahma educated the great saint Narada in this transcendental wisdom.

So it is also with The Bhagavad Gita. The philosophy of the Gita was spoken by the Personality of Godhead long, long ago to the presiding deity of the Sunglobe, and when such knowledge was misinterpreted by breaking the chain of authoritative aural reception, it was repeated by the Personality of Godhead on the battlefield of Kurukshetra. At this time Arjuna took the place of Brahma and of the Sun god to receive transcendental knowledge from Sri Krishna. In order to drive out the misgivings of the gross materialist, Arjuna asked all relevant questions about the Lord, and all relevant answers were given by the Lord to the full satisfaction of a layman.

Those who are too captivated by the glamor of the material world cannot accept the authority of Lord Sri Krishna on account of their polluted life and unclean habits. Therefore, one has to become thoroughly clean in habit and heart before one can understand the details of the antimaterial world. And Bhakti Yoga -- which means the process of purification by devotional service, as enunciated in the Gita -- is the detailed and scientific program of spiritual activity for all beings, from the beginner neophyte to the highest perfection of the line.

The basic points of antimaterial knowledge areas follows: The presiding Deity of the antimaterial world is Sri Krishna, the original Personality, as well as His expansions into many plenary portions. Such Personalities of Godhead can be known only by antimaterial activities, commonly called Bhakti Yoga or devotional service.

The Personality of Godhead is the Supreme Truth and He is the whole antimaterial principle. Material principles as well as antimaterial principles are emanations from His Person. He is the root of the complete tree. When water is poured onto the root of a tree the branches and leaves of the tree develop automatically. And in the same way when Sri Krishna, the Personality of Godhead, is worshiped, all the details of all the worlds are given into the heart of the devotee, without laboring in the materialistic way. This is the secret message of The Bhagavad Gita.
Posted by Jyoti Saha at 05:41 3 comments:

Swan of My Mind - Prayers by King Kulashekara 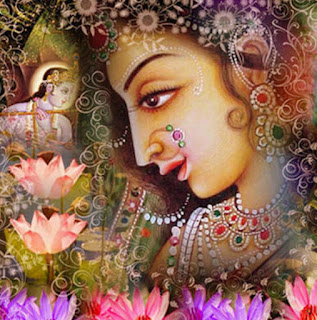 The Swan of My Mind

O Lord Krsna, at this moment let the royal swan of my mind enter the tangled stems of the lotus of Your feet. How will it be possible for me to remember You at the time of death, when my throat will be choked up with mucus, bile, and air?
NITAI PADA KAMALA

Purport to Prayers of King Kulasekhara
By His Divine Grace A.C. Bhaktivedanta Swami Prabhupada
This verse, prayer, is taken from one book known as Mukunda-mala-stotra. This prayer was offered by one king whose name was Kulasekhara. He was a great king, at the same time a great devotee. There are many instances in the history of Vedic literature that the kings were very great devotees, and they are called rajarsis. Rajarsis means: although they are on the royal throne, they are all saintly persons. So this Kulasekhara, King Kulasekhara, is praying to Krsna that "My dear Krsna, the swan of my mind may now be entrapped with the stem of your lotus feet. Because, at the point of death, the three elements of bodily functions, namely the mucus, and the bile, and the air, they will overlap, and there will be a choking in the voice, so I shall not be able to utter your sweet Holy Name at the point of my death.'' The comparison is given in this way, that the white swan, whenever it finds a lotus flower, it goes there and sports by diving into the water and entangling him in the stem of the lotus flower. So King Kulasekhara wants that in the healthy stage of his mind and body, he may be immediately entangled with the stem of the lotus feet of the Lord and die immediately. The idea is that one should take to Krsna consciousness while his mind and body is in good condition. Do not wait for the last stage of your life. Just go on practicing Krsna consciousness while your body and mind is in a healthy state, and then at the time of death you shall be able to remember Krsna and His pastimes and be immediately transferred to the spiritual kingdom.

At the Final Hour of Death - Lessons from life of Ajamila

Sukadeva Gosvami continued: Ajamila then saw three awkward persons with deformed bodily features, fierce, twisted faces, and hair standing erect on their bodies. With ropes in their hands, they had come to take him away to the abode of Yamaraja. When he saw them he was extremely bewildered, and because of attachment to his child, who was playing nearby, Ajamila began to call him loudly by his name. Thus with tears in his eyes he somehow or other chanted the holy name of Narayana. (Srimad-Bhagavatam 6.1.28-29)

Anxious to Save Themselves from Death

At the time of death people become very anxious to save themselves, especially those who have been sinful. Of course, the soul itself is not subject to death (na hanyate hanyamane sarire [Bg. 2.20]), but leaving the present body and entering into another body is very painful. At death the living entity can no longer bear to remain in his present body -- the pain is so acute. Sometimes when a person's life becomes too painful he commits suicide. But suicide is a sin punishable by the laws of karma.

When Ajamila was dying, he saw three ferocious and very frightening persons with ropes in their hands, unruly hair on their heads, and bodily hair like bristles. These assistants of Yamaraja, the Yamadutas, had come to drag Ajamila out of his body and take him to the court of Yamaraja. Sometimes a dying man cries out in fear when he sees the Yamadutas. Ajamila, too, became very fearful.

Submissiveness - A necessary quality of a Devotee

Bhagatji comes into the kitchen in Prabhupada's back garden every lunchtime to cook Prabhupada's chapatis. He is very expert at this and when I was learning to cook Prabhupada had me learn chapati making from him. Prabhupada likes Bhagatji very much, and so when Bhagatji brings the last chapati into the prasadam room for Prabhupada, he lets him sit and chats with him until the end of his meal.

I told Bhagatji today about my decision to not do any special vrata for Karttika. He was surprised and tried to cajole me into continuing, stressing that one must observe some special vrata in order to get the benefit of Karttika. But I held my ground. I told him that the observance of the vrata was useless if it meant I couldn't do my service to Srila Prabhupada. He conceded that it was a higher principle and relented.

Bhagatji also frequently attends managerial meetings and Prabhupada's afternoon darsanas. This afternoon at about 4:00 p.m. he brought some news about Nitai. He told Srila Prabhupada that he has been seen in Vrndavana with Yogananda dasa. Bhagatji was good friends with Nitai, and out of sentiment, he pleaded with Srila Prabhupada to allow him to bring Nitai to see him. He thought that if Srila Prabhupada could personally talk to him, he could straighten him out.

Prabhupada dismissed his request without prolonged discussion on the matter. "No. Unless he is prepared to come of his own accord, then what will be the use? Unless a man is submissive, then it is useless to speak with him." 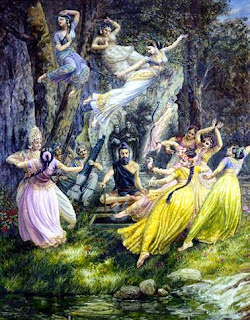 Just keep chanting Hare Krishna and moving the beads and focus on listening to the syllables of the Holy Names. As the mind wanders, we shouldn’t get agitated. Just keep chanting; don’t give up the process and eventually the mind cooperates." 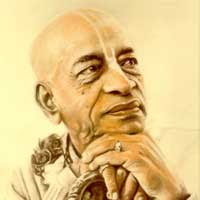